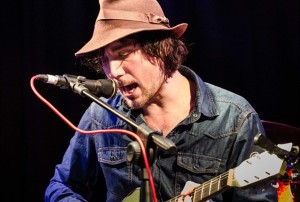 Benny Guitar Carr is a guitarist from Devon who is passionate about blues, jazz and roots music. Ben performs regularly as an energetic and engaging solo artist playing slide guitar and building up a big sound using a cajon, drum kick pedal and tambourine. Ben also has a rockin’ band The Hot Rats and a foot stomping duo Ben & Sy’s Stompin’ Blues – both feature on his latest album Good Times. Click here to read some of the brillinat reviews the album has been picking up!

Elements of blues, jazz, folk and self-penned songs are warmly portrayed through warm and soulful singing. Through his music, Ben celebrates blues heroes such as Bessie Smith, Lead Belly, Big Bill Broonzy, Robert Johnson and Howlin’ Wolf. Also you can expect to hear music influenced from some of the great crooners of jazz, from Bing Crosby to modern day artists such Tom Waits.

If you would like to book Ben please get in touch bennyguitarcarr@gmail.com or 07988 616035

AN ESTABLISHED and renowned part of the local blues scene, Ben has been around for many years, either with his band The Hot Rats or out playing solo as he’s doing tonight.

In busking style, he’s perched atop his beat box (otherwise known as a Cajon) with Dobro resonator steel guitar, made especially for him, and it’s quickly evident that he’s a master of his instrument.

Also incorporating a tambourine on one foot and operating the Cajon peddle with the other, his co-ordination and timing is a spot on while facilitating some upbeat and funky blues.

Ben doesn’t just play and sing the blues he’s living it, his love of the genre comes over with genuine sincerity as he incorporates a range of guitar styles from flat picking and slide whilst putting his own stamp on old numbers including Good Time tonight (Big Bill Boonzy) and Honey Suckle Rose, Ain’t Misbehaving (Fats Waller) before upping the tempo and switching to his cigar-box guitar and casting even more of his spell on us with some exceptional funky versions of Good Night Irene (Lead Belly) and Ready Willing and Able (Fats Domino) and Cat Fish Blues, I Just Wanna Make Love (Muddy Waters)

An extraordinarily talented bluesman, not only a joy to listen to but also interesting to watch, his style is mood lifting bringing old numbers to life and representing them to new audiences in a way that makes them sound fresh while he is careful to stay true to the original.

A truly underrated performer but he’s immensely happy doing what he loves and loving what he does.

Another animation I made for Cove Vodka! ... See MoreSee Less

Hope everyone is well. This is some Hoagy Carmichael for your entertainment   x ... See MoreSee Less

THANK YOU FOR ALL THE BIRTHDAY MESSAGES AND LOVE X ... See MoreSee Less

Hope all are well. Love is all i have for your entertainment i play my heart x ... See MoreSee Less