Here is a selection of some great reviews from the past year. To listen to some tracks or buy the album click here 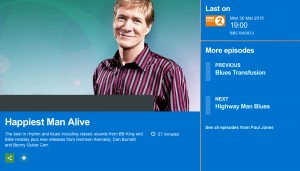 CD review from Blues Matters Magazine for Benny Guitar Carr ‘Good Times’ Oct 2015
Benny is based in Devon and is devoted to bringing to everybody a greater awareness of the blues, especially so with the possibilities that are available when you start to overlap and merge the musical strands that are blues, jazz, swing and roots music. To explore all these possibilities he has split his career three ways; solo, comprising slide guitar, Cajon drum kick pedal and tambourine, as a duo with added harmonica and thirdly, a full rockin’ band known as The Hot Rats. On this album he incorporates Ian Smith and The Frenchman Street Horns from New Orleans, the album was recorded in both Fudge studios New Orleans and P.M.C. studios Plymouth, England. The twelve numbers here are fine examples of the fusion of early twentieth century New Orleans jazz with electric guitar, fuelled by delta blues and swing, with just a touch of old fashioned music hall intimacy and sauciness. Everybody Needs Good Times is a bracing guitar groover with sweet punching horns and girlie chorus while, When I Get Low I Get High, is a splendid strolling, swinging, guitar ringing foot tapper, Benny’s low rasping gravelly almost megaphone vocal tones fully exhorts an urging goodtime factor. Drunk, All The Time, employs a jazz rich, sleazy and woozy swingin guitar that wonderfully meshes with a pleasing, blasting trumpet. The insistent and alluring late night rough edged Jazz Club mood that exists throughout this album sublimely entices and entwines you together with all these strangely attractive themes and styles. An evocative speakeasy inspired atmosphere inhabits You Ain’t, Good Looking Enough To Be Bossy, and You Know Nothing About Romance and transports you back to a rebellious cocktail-swilling, high kicking time. Well worth investigation! 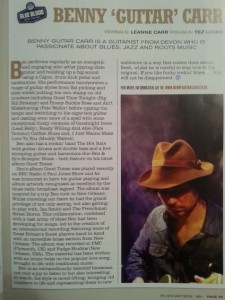 Benny Guitar Carr is a guitarist from Devon who is passionate about blues, jazz and roots music. Ben performs regularly as an energetic and engaging solo artist playing slide guitar and building up a big sound using a cajon, drum kick pedal and tambourine. His performance incorporates a range of guitar styles from flat picking and slide whilst putting his own stamp on old numbers including “Good Time tonight” (Big Bill Broonzy) and “Honey Suckle Rose” and “Ain’t Misbehaving” (Fats Waller) before upping the tempo and switching to his cigar-box guitar and casting even more of a spell with some exceptional funky versions of “Good Night Irene” (Lead Belly), “Ready Willing and Able” (Fats Domino) and “Catfish Blues” and, “I Just Wanna Make Love To You” (Muddy Waters).

Ben also has a rockin’ band The Hot Rats with guitar, drums and double bass and a foot stomping guitar and harmonica duo Ben & Sy’s Stompin’ Blues – both feature on his latest album Good Times.

Ben’s album Good Times was played recently on BBC Radio 2 Paul Jones Show and he was honoured to have his guitar playing and album artwork recognised as excellent by the blues radio broadcast legend. The album was inspired by a trip Ben took to New Orleans. Whilst traveling out there he had the grand privilege of not only seeing, but also getting to play with, Ian Smith and The Frenchman Street Horns. This collaboration, combined with a vast array of ideas Ben had been developing for songs, led to the creation of an international recording featuring some of Great Britain’s finest players hand in hand with an incredible brass section from New Orleans. The album was recorded at PMC (Plymouth, UK) and Fudge Studios (New Orleans, USA). The material has been written with an ironic twist on the popular love song, brought to life with traditional music.

Ben is an extraordinarily talented bluesman, not only a joy to listen to but also interesting to watch, his style is mood-lifting, bringing old numbers to life and representing them to new audiences in a way that makes them sound fresh, whilst he is careful to stay true to the original. If you like funky rockin’ blues….. you will not be disappointed. 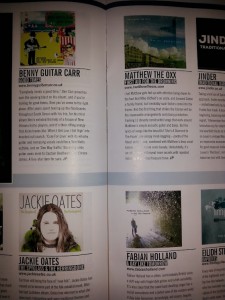 ‘Everybody needs a good time’ Ben Carr preachers over the opening blast on his album and if you’re looking for good times then you come to the right place. After years spent tearing up the floor boards throughout South Devon with his trio for his second album Ben enlists the help of a troop of New Orleans horns players, and it’s there ripping energy that kicks tracks like ‘When I get low I Get High’ into knocked out raunch. ‘Cure For Love’ with its wacky guitar and menacing vocals could be a Tom Waits outtake and on ‘One Way Traffic’ the slide guitar owes more to Captain Beefheart than Elmore James. A 5 star item for sure

AN ESTABLISHED and renowned part of the local blues scene, Ben has been around for many years, either with his band The Hot Rats or out playing solo as he’s doing tonight.

In busking style, he’s perched atop his beat box (otherwise known as a Cajon) with Dobro resonator steel guitar, made especially for him, and it’s quickly evident that he’s a master of his instrument.

Also incorporating a tambourine on one foot and operating the Cajon peddle with the other, his co-ordination and timing is a spot on while facilitating some upbeat and funky blues.

Ben doesn’t just play and sing the blues he’s living it, his love of the genre comes over with genuine sincerity as he incorporates a range of guitar styles from flat picking and slide whilst putting his own stamp on old numbers including Good Time tonight (Big Bill Boonzy) and Honey Suckle Rose, Ain’t Misbehaving (Fats Waller) before upping the tempo and switching to his cigar-box guitar and casting even more of his spell on us with some exceptional funky versions of Good Night Irene (Lead Belly) and Ready Willing and Able (Fats Domino) and Cat Fish Blues, I Just Wanna Make Love (Muddy Waters)

An extraordinarily talented bluesman, not only a joy to listen to but also interesting to watch, his style is mood lifting bringing old numbers to life and representing them to new audiences in a way that makes them sound fresh while he is careful to stay true to the original.

A truly underrated performer but he’s immensely happy doing what he loves and loving what he does. 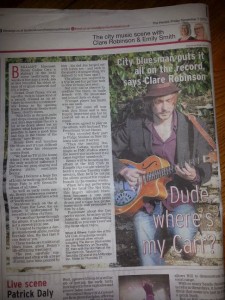 Great start to the open mic at Millbrook Inn, cheers everyone who came and Charlie Baker for having us!! Great music from Philip Mignaud, The Zaffiros, Tony Hale, Patrick Barton and I really enjoyed playing and jamming myself ... See MoreSee Less