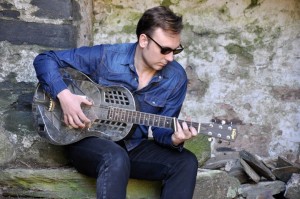 I grew up on the outskirts of London near Maidenhead and moved to Devon as a teenager. It was in devon working behind the bar of The Royal Oak I was lucky enough to meet hundreds of fantastic world class musicians from literally everywhere. I learnt to play guitar in my spare time when when I was not working, I was completely under the spell of such musicians as T-Bone Walker, Johnny Copland, The Allman Brothers and Elmore James. I also loved to paint. I started to gain confidence with some ambitions to perform. I took my guitar all around Europe when I was 19. It was on this trip I saw the great BB King and Clarence Gate Mouth Brown at the Montreux Jazz Festival. There were many great sights on this trip, however this was one of the best for me.

I had some lucky breaks including an acting role for Curved Air’s legendary violinist Darryl Way & Stephen Crook’s MTV production for a music video called ‘The Lovers’. During this project I played a lead acting role, with no words and just had to do as I was directed. The video was aired 4 or 5 times a day on Classical MTV for a couple of years. It still gives me the Heebie-jeebies to watch this, however I am very proud to of been part of it as Darryl and Stephen are fantastic musicians and artists.You can see the video if you click on this link

Amongst all the great things I have been lucky enough to of experienced so far in my music career, one has been privilege to of recorded my album with Vince Lee and my band at PMC studios. You can hear some of the music on this link

Blast from the past, 11 years ago me and my brilliant brothers James Carr on drums and Tom Carr on bass

Featuring Ben Carr on guitar/vox, Tom on bass and James on drums Cover of If The Shoe Fits (Wear It) by The James Harman Band

So im playing a couple of shows this weekend. I have the grand honour of playing a wedding then over to South Hams Brewery on Saturday 15th aug 7.30. Looking forward to seeing my friends there will be a great nightHEAD'S UP FOR A LINE UP CHANGE!

Expect no less than a groovy, vibey night! And with Phil getting the roast on again - max taste, max good times are here... with veg choices taken care of too.

This is a recent blues hero picture I've made of the legendary Hound Dog Taylor. This picture has been made from a study of shadow and 3 colours. Theodore Roosevelt "Hound Dog" Taylor (April 12, 1915 – December 17, 1975) was a pianist, singer but mainly known for his slide guitar playing which help form what we now know as Chicago blues. He had 6 six fingers on both hands, however in a more grisly story he supposedly cut the extra finger off his right hand, whilst drunk with a razor blade, leaving only an extra finger on the lefthand. He played with Little Walter and Koko Taylor and toured with toured nationwide performing with Muddy Waters, Freddie King, and Big Mama Thornton. ... See MoreSee Less

Too good not to share. The pickle sisters in color!!
(a vaudeville group from 1920 - that is all I can find on them) ... See MoreSee Less