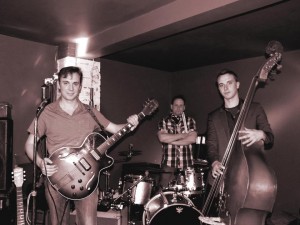 I also front the funky rockin’ blues band ‘Benny Guitar Carr & The Hot Rats’. The band is made up of Aly Day, myself Ben Carr and Tom Carr. We have performed at various festivals locally including the International Jazz & Blues Festival in Plymouth and the Ashburton Fringe Blues Festival. Whilst touring we have shared the stage with some world class artists such as Otis Taylor, Tony Joe White, The Wild Cards and Johnny Dickinson. In 2006 Benny Guitar Carr & The Hot Rats recorded a 13 track album with local musician extraordinaire Vince Lee. The album has been critically acclaimed by the music press and played on radio stations all over the world. As an illustrator and animator, I create some original artwork for my self penned songs – including International Man Of Mystery

The band plays as a hot guitar & vocal/bass/drums 3 piece and also as a bigger line up including saxophone and keyboards. Driven by energetic big band style drumming, we deliver are own fresh hard hitting sounds with big funky grooves and infectious walking bass lines, punctuated by soulful vocals, electrifying guitar leads. We play a sensational funky blues sound, which people have compared to the work presented by The Chess Record Label. No matter where you come from, no matter what the weather The Hot Rats will get you up and dancing.

HAPPY NEW YEAR EVERYONE! Thank you to all at The Tower Inn wonerful place to start the new year. Enjoy the 2020's my friends much love Ben x #auldlangsyne #thetwentys #slideguitar #harmonyguitars #bluessouthwest ... See MoreSee Less

It’s been an amazing year, so grateful for all of the wonderful places, events I’ve got to play and musical adventures I’ve had. So many great times and friends on the road. I’m playing my final 2019 show at The Tower Inn New Year’s Eve. Really fab place, anyone wanna come I have a spare seats ... See MoreSee Less